The centre is a significant boost to Hudson Institute’s genomic capabilities that will reduce timelines for testing from weeks to hours, enabling rapid diagnosis, early intervention and prevention and therapies targeted to individual needs.

“The centre will employ a range of high level scientists and bioinformaticians to translate genetic data into real world applications, such as diagnostic tests and personalised medicine,” said Hudson Institute Director, Professor Williams.

The unique co-location of the Centre within the precinct’s Translational Research Facility, where scientists and clinicians from Hudson Institute, Monash University and Monash Health work side-by-side, supported by world leading technology and expertise, will take genomics research in Victoria to the next level.

“Our researchers have access to a pipeline that enables their discoveries to reach patients in breakthrough time. This has been a long-term vision for us, and one that will see great benefits for our community,” said Professor Williams.

“Next generation sequencing technologies within the new Gandel Genomics Centre will enable our scientists to identify precise genetic mutations in tumour biopsies taken from cancer patients. Using this information, we are then able to identify the best and most effective drugs for those patients,” Professor Williams said.

“We are extremely grateful to Gandel Philanthropy and Gandel’s family for recognising the excellence of Hudson Institute’s genomic research capabilities and the future of genomics technologies,” said Professor Williams.

“Our vision for the Gandel Genomics Centre is that it becomes the premier site for genomic health research, recognised internationally for excellence and innovation,” said Professor Williams.

“My wife, Pauline and I have been supporting genomics work at the Monash Health Translation Precinct and the Hudson Institute for over a decade,” said Mr John Gandel AC, Chair of Gandel Philanthropy.

“Helping set up this Centre to enable future significant research in genomics and precision medicine was a natural next step in our productive and fruitful relationship.” 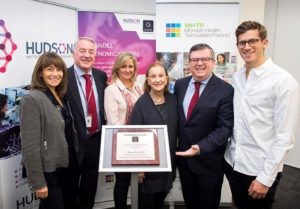 Gandel Philanthropy have supported genomics research capabilities at the Hudson Institute since 2005.

The Facility is located within the new $87.5 million state-of-the-art Translational Research Facility (TRF), which opened in March 2016. The TRF co-locates researchers, clinicians, and technological platforms to facilitate collaborations between our scientists and clinical partners to accelerate and coordinate the translation of scientific breakthroughs and commercial developments.